Jon Myers became a camera operator over 25 years ago, and when he later decided to attend a Steadicam workshop, he was hooked! In 2000, he bought his own Steadicam, and later a became proficient on a wide range of equipment, including:  the Technocrane, Akela, Russian arm, and every remotely operated camera including drones.

Jon enjoys collaborating with directors to come up with new and exciting shots for each project and has worked on feature films, commercials, music videos and sporting events. 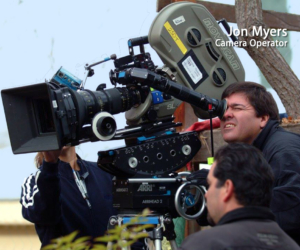 “Jon Myers is a joy to work with. His positive attitude along with his ability to effortlessly incorporate my notes into our storytelling is the perfect mash up for a great result.”

“I met Jon Myers on a feature 10 years ago and he has been my #1 guy ever since. He an artist’s eye and endless innovative strategy. Priceless.”

Tell me your idea, I’ll share my take, then cool stuff happens.

I often operate A Camera and I operate Steadicam, drone, and jib.

I’ve been in a few editing bays.